We hope you come out to support the Knighthawks while enjoying a fun night out on the town!  Below is the link that will allow you to purchase your ticket packages which comes with 2 drink vouchers to our pre-game happy hour!

Hope to see you there!

Posted in Miscellaneous | Comments Off on Darien Lake Fright Fest

National Updates and a Union Meeting

The National President of the APWU issued a statement regarding the contract negotiations. He apparently was satisfied with a tentative agreement reached through negotiations, however the tentative agreement was shot down by the Rank and File Bargaining Advisory Committee, a committee formed by the appointment of one APWU member (Mostly APWU Presidents and Vice-Presidents from locals like myself) from each of the 13 members of the National Executive Board. In part, President Dimondstein wrote a statement which says, “The APWU Constitution has a democratic process where any tentative agreement goes to the Rank and File Bargaining Advisory Committee for acceptance and their decision whether to send it to the membership for a ratification vote. The Rank and File Bargaining Advisory Committee had some serious concerns with the tentative agreement and sent it back to the APWU National leadership to reopen negotiations with management and attempt to address their concerns.”

You can read his statement on that—–> HERE!

There is a Union Meeting tomorrow night, January 17, hope to see you there.

Posted in Conferences & Such, National Agreement, Negotiations | Comments Off on National Updates and a Union Meeting

Happy New Year to all. Let’s make it a resolution to update the web page more often. If you are a member and received your last newsletter, I hope you didn’t throw it out. There is a coupon in it good for an APWU Local 215 T-shirt. If you’ve lost your coupon then please let us know before March 1st. Thanks

Posted in Uncategorized | Comments Off on HAPPY NEW YEAR!!!

Read the entire report at:

The Rochester Labor Council’s annual meeting is the 1st weekend in May—Our Local’s Delegates will be at the  NY State Convention in Schenectady, but if any members want to g,o it is free—you do need to register (see below).  It is in Corning, NY this year. 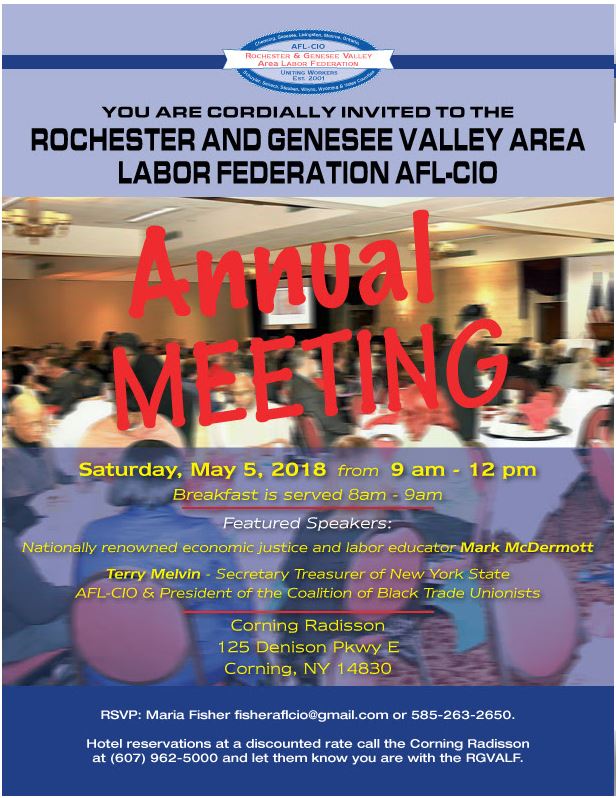 As mentioned at the Meeting last Thursday, there is an App that lets you easily give input to your Congressmen and Senators… And the App lets you know what the position is of NARFE (National Active and Retired Federal Employees). Check it out.

Posted in Uncategorized | Comments Off on Voter Voice App

I should have posted this earlier; we have a Union Meeting tonight, as we do every third Thursday of every month except July, August and December. Hope to see you there.

Posted in Uncategorized | Comments Off on Union Meeting Tonight!!!

Mark your calendar!  APWU is hosting another LIVE Tele-Town Hall on April 23!

Learn how you can get involved in the fight for a good contract! The National Negotiations Committee will also update participants on preparations for the upcoming contract negotiations.

Here are the details:

What: Contract Negotiations Tele-Town Hall Update
When: April 23 at 11AM and 9PM Eastern Time (8AM and 6PM Pacific Time)
Where: We will call you! You can register to join the call here.

When you sign up, you will also be able to submit your suggestions for the negotiations and for the campaign.

We need everyone Fighting Today for a Better Tomorrow if we’re going to win improved working conditions and a better standard of living for APWU members and families. Click here to join the call.

Posted in Uncategorized | Comments Off on Contract Negotiations Tele-Town Hall 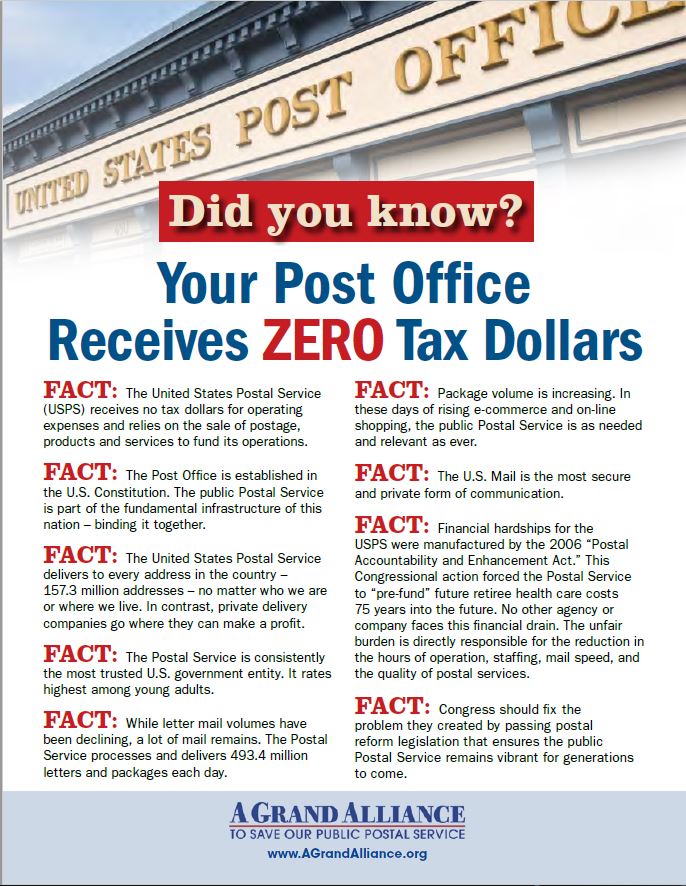 Posted in Uncategorized | Comments Off on Tax Day is April 17th!!

The following is a message from the APWU President and the Industrial Relations Director:

Pray for the Dead and Fight for the Living! Those words are attributed to the great labor organizer and activist, Mother Jones. On April 28, 2018, we will renew our fight for safe jobs in our workplaces.

April 28th of each year is known as Workers’ Memorial Day – a day to remember those who have lost their lives, suffered injuries, or occupational illnesses on the job. This is also the day that together we let the Post Office know we will Stand Up for Safe Jobs!

The Post Office is a dangerous place to work. Based just on the accidents and injuries reported, the Postal Service is the most dangerous government agency to work for (Bureau of Labor Statistics, 2016). More of our sisters and brothers are injured at work than at nearly all other federal agencies combined.

Always be cognizant that you could be the next statistic for the Postal Service if you get hurt! You go to work to earn a living, not to get injured or die.

You have the right to a safe work place and to return home every day in one piece. We encourage you to enforce your safety rights through the Union by acting together with your co-workers, by filling out PS Form 1767s, filing grievances, signing petitions and speaking up! And avoid buying into management plans, like the “Safety Ambassador” program, which are set up to pit worker against worker and bypass your union and union involvement as the most effective path of addressing safety concerns.

Let’s not have another post office named after a worker killed on the job. Join your union brothers and sisters around the world on April 28, 2018 and Stand Up for Safe Jobs – a Right of Every Worker! 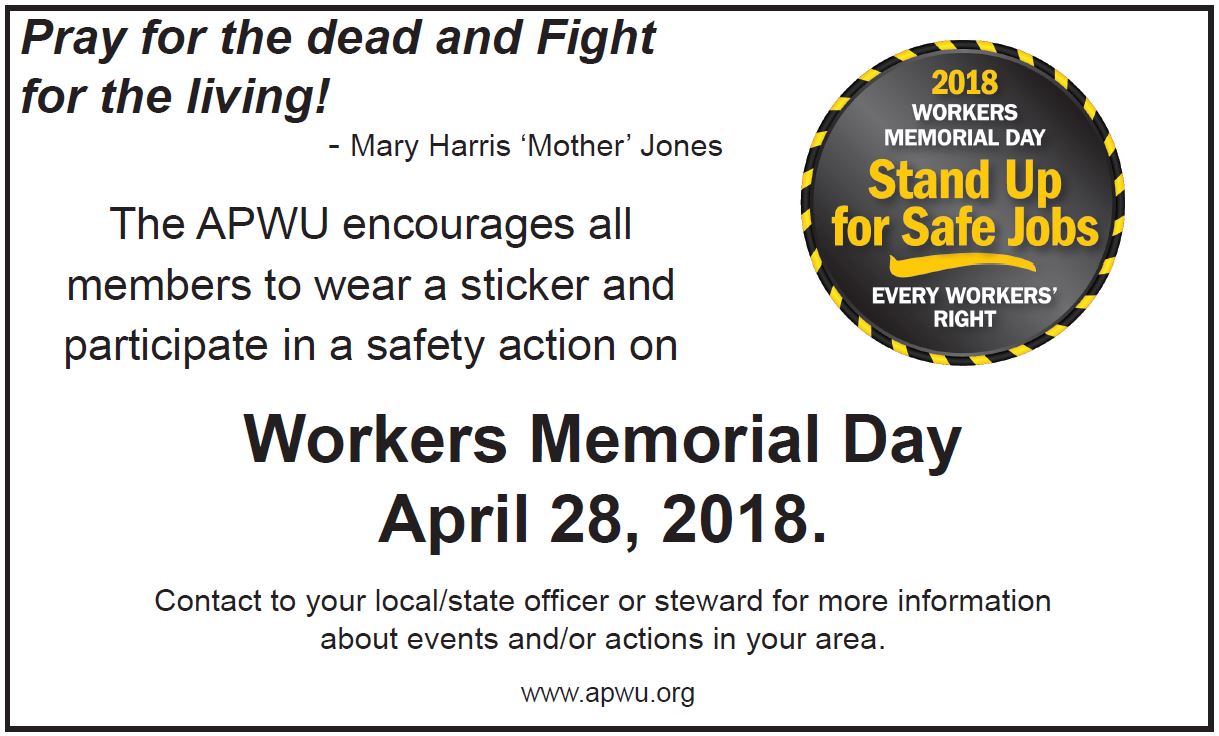 Posted in Uncategorized | Comments Off on Worker’s Memorial Day